Justin Cooper, dressed in park ranger garb, introduces himself as yet another park ranger who has moved to Brooklyn. He explains that like most park rangers, he needs a side job to support himself: so he does performance art. This joke works mostly on the level of its simplicity, specifically the awareness of its own simplicity. Most of the performance operates on this hyper-aware level wherein the jokes, magic tricks, and stunts adopt an aesthetic of simplicity and childish absurdity as the joke is often the joke itself: its awkward and/or childishly sincere delivery, basic structure, and anti-climatic punchline. Cooper and his partner Ross Moreno so often comment on the performance (usually self-deprecating) within the performance that it can become unclear at which point a seeming mistake is genuine or just part of the performance, part of its self-referentiality. 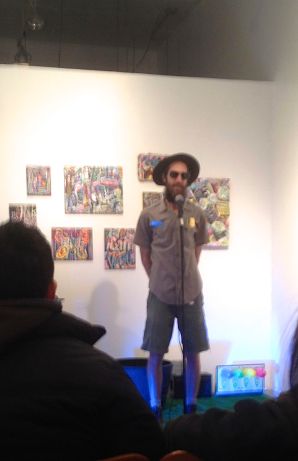 Another park ranger moving to Brooklyn

In the first part of the two-parted performance, Cooper makes a joke about his partner’s birth saying “He was born with a full head of hair, and a cigar in his hand that he used to cauterize his own fallopian tube.” Realizing his mistake, Cooper fumbles for the correct term, needing to ask the audience before he remembers what he meant to say is “umbilical cord.” By the time he returns to the punchline (“But I don’t believe it. Cause I don’t think he ever had hair”) the audience has already forgotten or lost interest in the joke’s set up, and the punchline loses all steam. But those who went to both performances would realize that what seemed as a genuine mistake was actually intentional, as Cooper repeats the same joke with the same mistake in the second show. The duo often undermine themselves in this way, and to some extent they do it to play with the audience: a Kaufman-esque effort to baffle, antagonize, or otherwise playfully prank the viewer. The performance feeds on audience reaction, its confusion or discomfort in particular, often going as far as implicating the audience in the performance, during moments where character/fourth wall is broken or the audience is invited (or more likely forced) to participate. 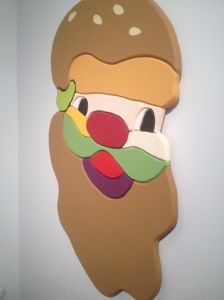 The two performances are part of Harbor Gallery’s “Economy Candy” exhibition. The name is taken from a Lower East Side candy shop that opened during the Great Depression. A candy shop which sells discount candy, whose existence is necessitated by a harsh economic reality, acts both as a distractive relief from those realities as well as a reminder of them, this reminder just thinly and almost mockingly veiled by the shop’s colorful, candied walls. This juxtaposition, the dual role of distraction and reminder, which can be applied to comedy and art as well as to candy shops, seems to be the main concept dealt with by the artists exhibited in the show. These artists, playfully and with a sense of humor, explore the ways that art can distract/ soothe/ even numb and the ways it can make reality felt more immediately. These two effects of art are not mutually exclusive, as all art contains some ratio of both, and each effect can be used to produce the other: reality, struggle, pain can be sublimated into entertainment while alternatively, as seems to be the case with some pieces in this exhibit, a more kitschy/ readily accessible aesthetic can be adopted exactly for the moment when it is broken, the veil lifted, and rather than being distracted, people are made more  keenly aware of their discomfort for the element of surprise. 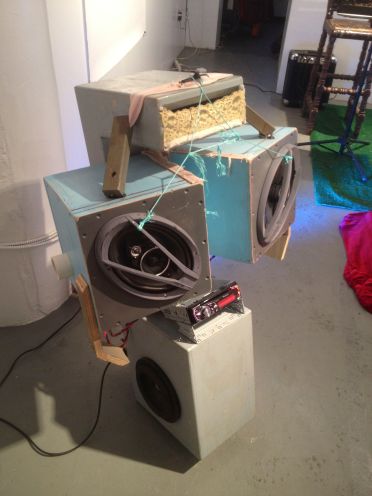 Two pieces by April Childers use familiar symbols of American culture to make large, absurdist sculptures. “Pocket” is an oversized, denim pocket filled with a half-deflated beach ball so that it balloons out from the wall. With “A Santa for all Seasons (Cheeseburger Santa)” a cartoonish depiction of Santa Claus resembles an anthropomorphic cheeseburger. The combination of these otherwise harmless and familiar images creates a sculpture that is as unsettling as it is humorous. Jeff DeGolier creates sculptural collages using a variety of objects and materials: coffee cups, champagne glass, sawdust, glitter, mirrors, yarn. His piece “Motor Boat” is constructed from a car stereo and two large speakers which are draped in doilies and yarn, a collage of the loud and the delicate. Maria Britton makes abstract paintings using acrylic paint on bedsheets, which are wrinkled so that the canvas, rather than being simply a backdrop on which the piece is painted, asserts itself as being part of the piece. Alicia Gibson uses acrylic, oil, and spray paint to make colorful, loud, disorienting paintings which seem to reflect a chaotic experience of urban life. 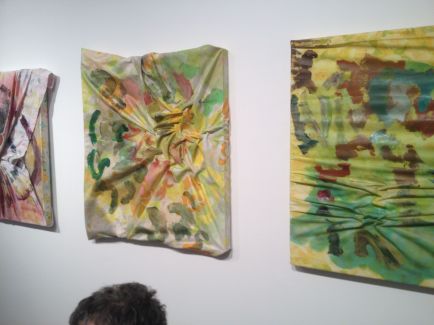 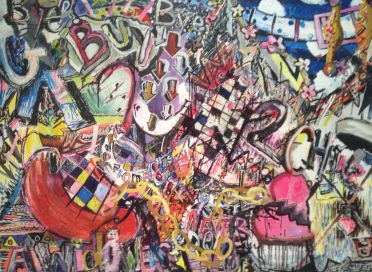 Much of the humor in Justin Cooper and Ross Moreno’s performances come from playing with these two juxtaposed forces in art and comedy. At one point Moreno, dressed as a clown, performs a magic trick only to start berating the audience for not “understanding” it. Distraction and diversion are the fundamental techniques of a magician; it is important for the magician to divert the audience’s attention or mislead their expectations so that trick takes them by surprise. In the case of Moreno’s bit, it is the magic trick itself that is the diversion, they expect some sort of surprising conclusion to the trick but they do not expect the performer, dressed as he is in a clown costume, to suddenly turn on them. At one point Cooper plays a lounge singer who in between songs confesses to his lingering, debilitating depression. Similarly, the show’s “encore” features Cooper playing an overenthusiastic pitchman who at one point begins bleeding from his mouth and reveals a wound on his torso before collapsing to the ground. Their humor comes from diverting the audience in some way, with some silly/ childlike aesthetic, soothing lounge music, or excess of enthusiasm, only to allow the things broiling below the surface performance, some antagonism between performer and audience, depression, etc., to reveal itself. 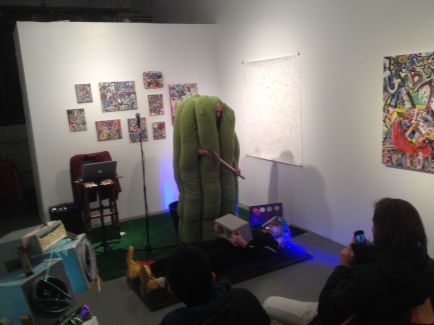 The “Finale:” Justin Cooper attempts to break a cinderblock over Ross Moreno