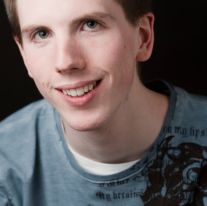 Sean McCarthy is a New York based stand up comedian living in Bushwick. Every month he hosts The Major Major Show, a showcase of local comedians at Molasses Books. His first comedy album can be downloaded  free from his website.

First, speak a bit about your background. What lead you to comedy? What kind of material are you drawn to and why do you think comedy is the best way to address that material?

I was sort of a class clown type when I was younger. In high school my friend dared me into doing an open mic which was fortunate since I was such an introvert I don’t know when I would have started on my own. After that I was hooked.

My favorite material is the kind that is funny while also presenting the comedian’s world view, even if it’s one I disagree with. I love when I can watch a stand up and laugh and then think about things that hadn’t occurred to me before. Hearing George Carlin talk about religion entirely changed the way I thought about it.

Comedy is entertainment and entertainment is a great way to convey ideas mainly because it’s not boring. You can talk about literally whatever you want and have people listen as long as you can make it funny.

You have a joke about politics being boring in order to keep people from paying attention (sorry for the poor paraphrasing). Do you use comedy as a means to get people to pay attention to things that have an effect on them?

Politics are boring because in a republic the rich can’t control the masses through fear so instead they have to find ways to make them divided and indifferent. I use comedy to try to talk about the things I see but I don’t hold any serious desire to raise awareness or change things with comedy, I just want to make people laugh with the kind of stand up I most enjoy.

You mentioned George Carlin. Carlin is a great a example of a comedian who’s able to entertain without compromising his ideas. As a comic who’s drawn to this type of material, do you find it difficult to strike a balance between entertainment and ideas without one distracting from the other, or do you find they naturally go together?

To me there is no conflict because entertainment is always supreme. I do this because I want to make people laugh and everything else has to be secondary to funny. It’s great when I can discuss what I feel is an important issue through comedy but I’d rather write a funny bit about something meaningless like shampoo bottle labels than some big political joke that is interesting but unfunny.

How did the Major Major Show come into fruition? What were your intentions for the show in the beginning?

I moved to Bushwick a little more than a year ago and heard about Molasses Books through a friend. I visited it a few times and it seemed like a really cool spot to put on a show so I messaged the owner and I’m thankful he was excited about the idea. A lot of New York based stand ups live in Bushwick now but there’s not as many shows or open mics in this area. My hope was just to provide a good, intimate comedy show not only for the comedians who live in the area but for the other people who are just moving out here. There’s so much great stand up in New York and most of it can be seen for free so I think everyone who lives here owes it to themselves to check it out.

Venues for other art and entertainment related events seem to increase here daily, but, like you said, there is not a lot of stand up happening in the area, despite its significance in the culture of the city at large. Do you have any comment on this, or on the comedy scene here in general? Do you sense any kind of emerging comedy scene in the area?

Yeah, I think as comedians keep moving here more things are going to happen in this area. There’s already a great show every Friday at Cobra Club, they have shows at Tandem Bar, and there’s now a Tuesday show at Ange Noir. I think right now Bushwick and Astoria are the two main places most New York comics live and comics are lazy and don’t like taking the train places so I expect more and more great shows in this area.

The next two Major Major Shows will be on June 27th and July 25th at Molasses Books, 770 Hart St.