Hello Brigette, Tell us a little about yourself.

I’m from Jeffersonville, Vermont, grew up above my hardworking/hippie/catholic parents’ log cabin restaurant. Besides serving food, the restaurant hosted Art and weirdos and musicians, along with tourists and locals. I graduated from Bard College with a degree in Experimental 16mm film. I moved to my Bushwick Home in 2003.

I worked the 7am breakfast shift, 6 days a week in a diner on broadway for 2 and 1/2 years when I first moved here. I loved getting to know my neighbors and my community over hard work and breakfast specials every morning. I still know many neighbors coffee preferences. For a few years after I built electronics (synthesizers and effects pedals) locally in the neighborhood. For the past 5 years I’ve worked as a nanny with a variety of other creative and domestic works in my past. Bushwick remains a big part of my life and my daily routines. 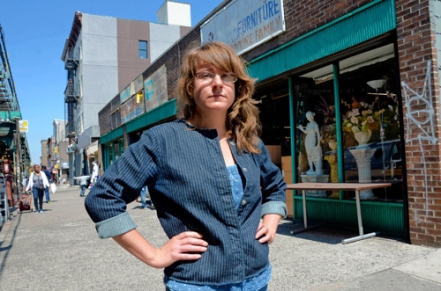 How did the North West Bushwick Community Group start? What were the circumstances and how did it gain momentum so quickly?

NWB formed out of the Bushwick Communities’ opposition to the proposed re-zoning and development at the former Rheingold Brewery Site (specifically the Read properties ULURP application).  We have continued as a group engaged in housing justice, land use, and local community needs.

I think we were able to gain momentum quickly for a number of reasons. We were a diverse group of residents and locally active individuals who were able to clearly and cohesively voice our opposition and our goals. Social media helped for sure.

Individual residents’ efforts were incredible in bringing the group forward and galvanizing the Community. Individuals engaging in outreach and sharing news with their neighbors and bodega clerks was a big part of what kept new energy coming and group momentum going. But I think we owe a lot to the many groups and organizations that core founding contributors were able to engage in our early formation. These groups were able to spread awareness, share resources, and skills that allowed the group to grow capacity and continue our efforts.

Some of the groups that were part of building our NWB momentum in the early Rheingold ULURP outreach and Advisory Panel Formation days were: The Silent Barn, Rheingold Homeowners Association, BEAN, The Living Gallery, The New School, and COHSTRA.

Also I’ll go there- I think the truth the group was calling out resonated with residents, local groups, nonprofits, city agencies, and elected officials. The truth we spoke and the justice and accountability we called for kept the group focused and determined to keep engaging and doing the hard work. 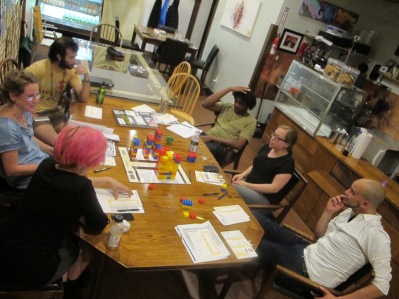 How do you think the NWB and the community changed the outcome of the Rheingold re-zoning?

That’s hard to say exactly. I can say post-Rheingold, Bushwick is a Community much richer in housing and land use knowledge. And this will ideally serve community interests well in our current Community Based Rezoning by CM Reynoso. I also feel the level of clarity and dissatisfaction we communicated in our Panelist meetings with the developer ultimately contributed to the increase in affordable housing at Rheingold and the final negotiations to transfer 7 lots of land from the developer to the Community (to be developed into Low Income Senior Housing). These are major mitigations from the developer and Bushwick will benefit from these increases. As well as other community funding for schools and anti displacement legal services.

Has it been challenging making sure that the developers come through on their promises from negotiations with the community? Is this a constant ongoing thing?

This is difficult and a constant on going thing. With the Read development at Rheingold, CM Reynoso formed a Community Construction Committee to monitor the project and the timeline for mitigations to be implemented.  Without binding legal commitments, an informed and engaged Community is what ultimately holds developers to their promises.

What, if any, are some organizations that NWB have linked up with?

Early in our formation NWB was supported with Educational Workshops and Urban Planning/Housing Expertise from Students & Faculty from The New School, Masters Program in design & urban Ecologies and members of COHSTRA. I participated in a COHSTRA documentary for an upcoming Fall ’14 MOMA Exhibition.

Ongoing, and during our a Rheingold Campaign, NWB worked with local non profits (Make the Road NY, CUFFH, Los Sures, St. Nicks Alliance, EWVDCO), Community Board 4, CM Reyna & CM Reynoso, Urban Justice Center,  and Brooklyn Legal Services Corp. A. We have done a few events with the symbiotic support of Educated Little Monsters, youth group. We are hoping to form a local coalition with NAG.

What are some current and future projects the NWB is working on?

We are gearing up for the Beta Launch on 8/19 of our Mapping Project, a NWB collaboration with Michael Ziggy Mintz. It’s an exciting tool for communities, organizations, and tenants. I’m really interested in the potential of participatory data sets to track changes not successfully measured by city and public data as well as to humanize the data that holds Communities’ stories of change and displacement.

Housing Justice is complex and NWB is excited to help share opportunities to learn and engage! On 9/28 we are co-presenting an exciting educational opportunity from COHSTRA & The New School with local hosts Saint Joseph’s Church and the Silent Barn. I’m excited to learn with my neighbors about NYC housing history, climates, and possible solutions. Presented by some rad academic friends. Come learn too!

What ways can local activists become involved with NWB?  What’s the best way to keep up to date and find out information on NWB?

Check out our website www.NWBcommunity.org, it has links to our calendar, and google group so you can stay in touch. Come to an Every-other-Monday NWB Community Meeting and join our conversations. NWB Monday Meetings are also a great forum to meet other Community members interested in learning and being active engaged neighbors. Feel free to bring initiatives to the group as well as join ongoing NWB work. All skills welcome.