Pictures are of the video installation “Traffic” by Elizabeth Orr, on display at Pseudo Empire (467 Troutman St.) until Oct. 5th. 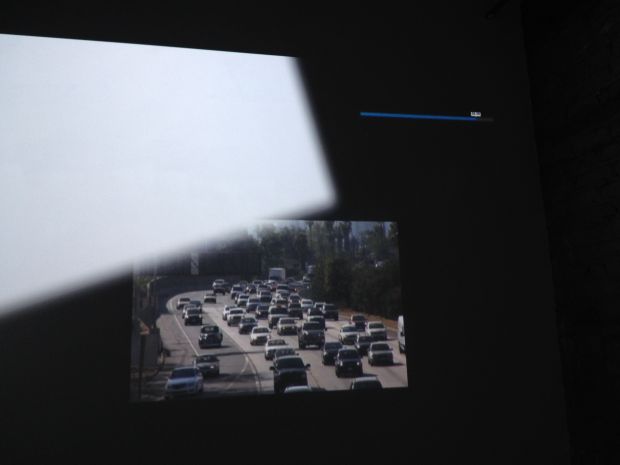 The gasoline powered procession, wrinkled land starched by pavement, the sun stifling white. A daily spectacle: long automotive limbs unravel in yawning exodus; steel  in carbon exhaust and billowing sunheat; an awakening, a resurrection. Organic material broken down into excremental chaos, siphoned from the earth’s stomach and injected into engines, reanimated in the agitation of pistons, a mechanical necromancy. Air-conditioned chambers fed on primordial foam, digested and redigested, spew fumes that flower into a hazywhite and metallic sky. A dull guiding light sits above them during their transmigration. They file into the city, fill its hollows with quivering activity, bring its stone-body from sleep into being. They feel excitedly the pressure of flat surface from every side. They offer themselves pregnant with energy, expanding and bursting in hot yellow clouds, sending smoke to scale the length of skyscrapers. It is a delirious expenditure, a harvest. Their language is purely mathematical: it is an anti-language: the language of tongues to which everything tastes of metal: a language that delights in its own desecration. Where among them is an unapologetic imagination? In steam and steelheat a dough rises; it lifts its shape above dark thighs of river and, tilting toward night, freezes into a glacier of salt. This is their offering.  And at evening as the immediacy of experience thins to wave and mist, still droning in  red ears, they descend and sleepily shelve themselves back into traffic.