Images taken from “Integument” by Scott Saunders at Wayfarers Gallery, 1109 Dekalb. The term “integument” is defined in the press release as ” something that covers or encloses; especially :  an enveloping layer (as a skin, membrane, or cuticle) of an organism or one of its parts.”

See the object. Peck through stiff yet fragile walls and discover within a vital and vulnerable embryo, a universe of potential forms. Intricate labels frame our perception, a translucent skin of microscopic width separating, categorizing, and keeping every individual thing self-contained, to overripen with associations. These associations extend deeper than the psyche, engraining themselves physiologically, producing pleasure from the harmonious and repulsion at the contradictory. Preventing interactions between incompatible forms is perhaps less neurotic than hygienic, and descends from a fundamental phobia of disease and physical corruption that creates the need to classify certain things as clean and others as unclean or untouchable: a projection onto the object world the sanctity of separateness we desire to preserve of ourselves. Contact with an object increases the potential for bacterial invasion and violation, parasitic growth, and decomposition of sanctity. Thus everything is kept divided and ordered, classified by genre, style, era, family, kingdom, feathers, scales, fur. The minutest transitional stage in the metamorphosis of each being is tracked and tagged to prevent the existence of undocumented intermediary stages.The reality of one object is secluded from that of another object, and cases permitting transgression or crosscontamination (i.e. food preparation and consumption) are monitored and ritualized. 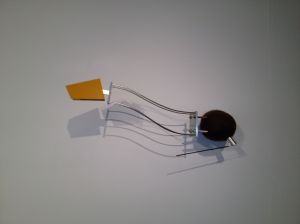 Encountering an object that is unclassified, unrecognizable, or intermediary is a call to either reel the object under a broad umbrella or else invent another term and begin the growth of a new chain of associations. There is pressure to closely monitor one’s own development, to rein the shifting spectrum of one’s personality into a predetermined identity, aligned with one group and disassociated from another, and if need be, resituate oneself once shifted too far outside an identity previously established. Despite such efforts, everything sits uncomfortably at the edge of its every classification, whether externally or self imposed. No matter how complex the definition, everything is only half-defined; some aspect always falls beyond the frame. In these unaccountable margins all things seep into each other without oversight. Here, where things mix and intermingle is it possible to pick at the contextual skin and peel it off, at least partially, and reveal the object returned to embryonic form, unobscured by the walls that make it separate, sterile, static.