1) Please tell us who you are, where you’re from and what you do!

My name is Danielle De Jesus. I was born and raised in Bushwick Brooklyn in what is known as Killerhull (Woodhull hospital) by locals. I am an artist working in various mediums including photography, painting and Etch a sketching. 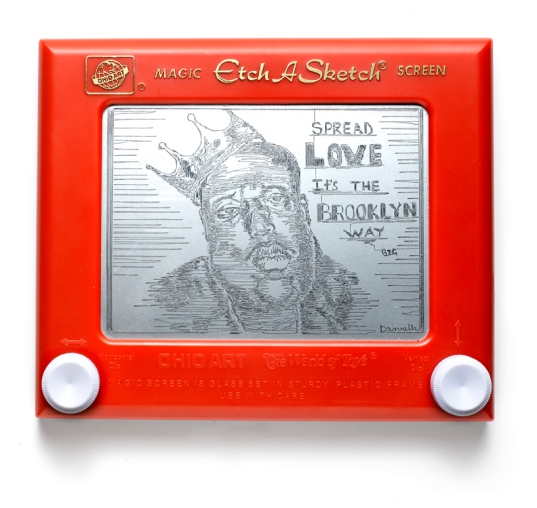 2) Please tell us about your mother’s fight for her home, along with any advice for someone who might be in a similar position.

My mother and I moved to Jefferson Street when I was 4 years old. I lived with her on Wilson ave from birth until then. It was during my senior year of high school in 2005 when we first started noticing the changes occurring. A few months later my neighbors and friends all began being bought out of the building and the surrounding buildings. $5,000 was what they settled for. Consisting primarily of very low income immigrant latinos, it seemed like a good deal at the time, but I refused to let my mom settle for it. I knew something was up, and I wasn’t going to let her give in so easy. Then after months of the slumlord calling and randomly showing up at our apartment asking when we were going to move, harassing us constantly, upping his offer, court dates and fighting, my mom was able to stay in her apt. With the help of the city and free legal aids, she is able to stay put. Although, still today, Mr. Slumlord calls occasionally asking if she has found a new place and offering a larger sum of cash, only to get the phone hung up on him. 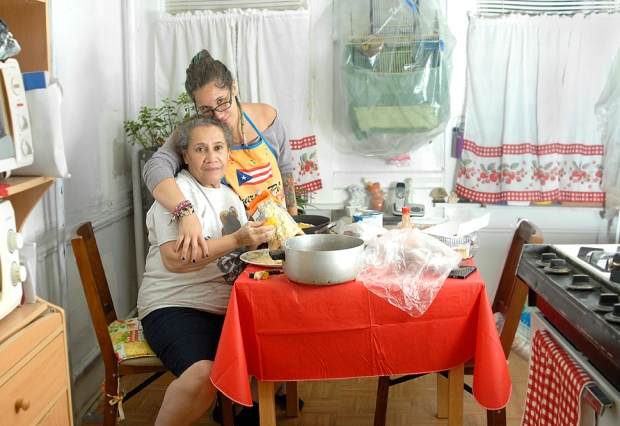 3) Could you tell us about the sign you made in your window and its effects?

I once put up a lime green poster on my mother’s window that read “STOP GENTRIFICATION” and the definition of gentrification. For two months the slumlord could not rent the empty apartment that was next door. He then took my mom and I to court, where I made his lawyer look like a complete jackass, The judge decided that it was totally legal for the sign to be there as long as it was not on the front door of the building. My mom later made me take it down due to being overwhelmed with stress from the slumlord dirtbag.

4) What are your own personal struggles regarding gentrification right now? You described to me feeling somewhat torn regarding where you are currently living, could you elaborate on that?

Wow. This one is quite complicated for sure. I currently live in a building that would be considered a product of gentrification. Although my mom still lives in her apt, I myself have lived in three other locations in the past few years that would be considered gentrified. Before moving into my current location in Ridgewood, I lived in Bedstuy for about 4 months. Even though it was just 3 blocks away from the hospital I was born in, and 8 blocks from where I grew up, it was completely new to me. Growing up on my block, you knew which streets and areas to avoid, and this place was one of them so it was completely different to me. Living there I got to feel exactly what the new comers into my neighborhood must have felt. I was the enemy. Even my own people, Puerto Ricans of the area, side eyed me and snickered when I passed them. I felt so out of place and unwelcome, not to mention super unsafe. But speaking to some of the elders from the area, I realized that they were feeling exactly what my mother and I felt. It wasn’t  that we didn’t want to clean up the area, it wasn’t a racial thing, it was more of a comfort and cultural thing.

This was a place that was ours, where we knew every face within a 6 block radius and beyond, where we could knock on our neighbors door if we needed adobo or a roll of toilet paper, where we knew exactly where all of our spices were in the supermarket and could actually afford them. It was home. The problem was our environment changing and losing the culture that existed. Bodegas turning into swanky bars, supermarkets blaring english rock music instead of Salsa, Cops being called because we were “too loud”, not knowing who lives next door because they move so frequently, feeling uncomfortable in our own home, thrift shops where families would shop for their children because they couldn’t afford new clothes are now filled with over priced “Vintage” trash. I mean, how could there not be tension? It’s tough for me now though. I feel that I’m in this place where I can’t fit in with old Bushwick, but I’m supposed to. I’ve been told that I am “trying to be white” because I dress a certain way, skateboard, and have a decent job. I now find myself in this weird identity crisis because I know that I am Bushwick, everything about me IS Bushwick. I can turn the “hood” on real quick if I’m angry haha! But, I know that I am looked at otherwise. Most of my friends now are the new kids in town; artist, musicians, and one of my closest friend’s is an engineer. So I’m stuck in this place where I don’t know where I stand anymore… 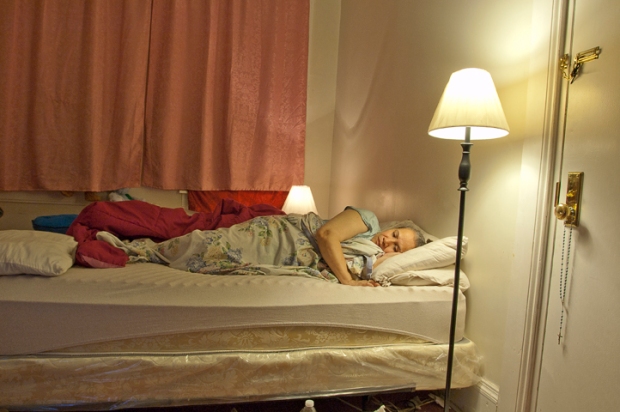 5) What advice would you give to someone who just moved into Bushwick, regarding being a positive member of the community?

I would advise you to keep your nose leveled. Don’t act like you’re better than those around you because I’ve seen it happen way too many times in the supermarket, even to my mom, and had to avoid smacking the shit out of someone. Be part of your community. Talk to the locals and befriend them. I mean that’s a street smart rule that goes way back to old Bushwick and probably any hood. Also, support your local shops that were there before you and any places that are already established with the community.

6) What advice would you give to someone who has lived in Bushwick all their lives, regarding being a positive member of the community?

Know what you’re capable of doing. You can do ANYTHING that you put your mind to and are passionate about, trust me, absolutely anything. Think becoming the first latino president from Bushwick is impossible? Think again… Take advantage of every single resource you can. Free education is everywhere for us. Don’t think you can get into college? bullshit. Don’t think you can get into the college you dream of because your grades suck, give me a break! I got rejected from FIT 3 times before I got in. My grades were trash in H.S so FIT was not having it. I had to go to community college for a year, make connections with great mentors at the school even before I was accepted and even negotiate with the dean of the photography program before I was finally accepted my last try. Nothing is impossible and if you want to stay in Bushwick, hold your own. Educate yourself on what is happening, not only in Bushwick, but NYC in general. Stay focused on your goals regardless of how others see you and make things happen the way you intend them to.

Thank you, The living gallery, for being so open to the community and making yourself a part of it by working with locals and opening your doors to us.

One thought on “Meet Danielle De Jesus, born and raised in Bushwick Brooklyn”