Matthew Gantt at his audio mixer.

Matthew Gantt performed two compositions played on an audio mixer, made up of layered looping tracks of prerecorded instruments and sounds, each based around “an open-ended structure,” which he was able to manipulate midperformance.

Gantt claimed during the Q&A following the show that he conceives of his pieces as being “compositional objects,” completely independent of any personal or autobiographical themes. He conceived of himself as a worker and the compositions his products, and this idea of impersonal production is an interesting lens through which to view his performance. 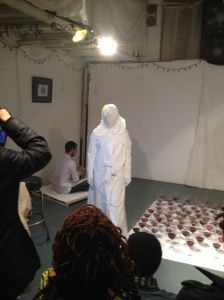 Unlike Gantt’s performances, most of the other performances were informed by the performers’ explorations of identity. Natasha Jozi’s performance featured the performer covered from head to foot in white cloth, circling a display of several wine half-filled wine glasses, as she spoke several phrases in Urdu that were simultaneously translated into English by a fellow performer. Jozi eventual broke the pattern of circular movement as she moved into the centerpiece and began covering her costume with wine, staining it red.

Jozi, who grew up in Pakistan, claimed the piece was based upon her own autobiography, spirituality, and as she does not drink and is uncomfortable with alcohol, the act of immersing herself in discomfort. Her performance reflected the repetition of ritual, exploring themes of language, wine as symbol of something sacred and also something that “stains.”

Ayana Evans confront man taking a picture of her in Chelsea.

Ayana Evans presented a montage of clips from her “Operation Cat Suit” video art series, in which she dresses up in the eponymous neon colored, tiger striped one piece suit, travels to different art districts in the city, and confronts people trying to take pictures of her, in order to gauge these people’s reasons for doing so. According to the artist, the video series is a social experiment on the act of “heightening oneself,” of amplifying one’s personality and appearance, and an exploration into the kind of attention and voyeurism garnered by this act. 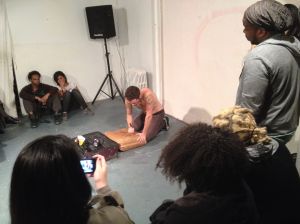 Ian Deleón’s performance, titled “Open Veins, Diabetic Souls,” concerns the history of colonization in the Caribbean, in order to explore his own family history, as well as bring attention to the complex colonial history of the familiar, which in the case of this performance was Domino Sugar. The first picture shows Deleón drawing on a large bag of Domino sugar what was revealed at the end of the performance to be a map of the symbolic meanings and historical associations of the props he used during his performance, bringing the artist’s thought process into the actual material of the piece.

Deleón dancing with bag of sugar.

This picture shows Deleón wearing a gag ball (a reference he revealed later to the Puerto Rican “Gag Law” of the 1940s which suppressed independence movements), and dancing affectionately with the bag of Domino sugar to Carribbean music (one particularly relevant song on the playlist was “Rum and Coca Cola” by Lord Invader, who sings in the chorus “Drinking rum and coca cola/ Go down to Point Koomahnah/ Both mother and daughter/ Workin’ for the Yankee dollar”). As the performance went on, it became progressively more of a strain for Deleón to keep holding the heavy bag.

The show closed with Ellen O’Meara, not pictured due to technical difficulties (dead camera), who performed two lyrically minimalist songs played with a drum kit and looping, echoing sounds. With this performance, O’Meara claimed she was experimenting with methods of execution she isn’t used to: new technologies, different lyrical approach, and performing solo, which she said she usually does not do.

Cleaning up after Jozi’s performance.

“This is part of the piece, by the way,” Matthew Gantt joked as he struggled to set up his equipment, having to move to different spots around the space until he found one close enough to hook his equipment up to the sound system. Though not meant to be taking seriously, there was something interesting in the statement with regards to the show’s theme of intention and intentionality; something interesting in how the event around a performance, the set-up and breaking down of props and equipment, could be understood as being incorporated into the performance itself. There seemed to be a move in many of the pieces to intentionally incorporate things outside the performance proper, to appropriate them or at least bring out an awareness of them. After her video, Ayana Evans presented some of the YouTube comments on her “Operation Cat Suit” videos; during his peformance, Ian Deleón drew a map of his thought process and read a passage from Open Veins of Latin America, one of the source materials for his piece, Matthew Gantt discussed how the approach he took toward his compositions was meant to incorporate all of the logistics of music making, rehearsal, booking gigs, etc. Pictured above is Natasha Jozi, Esther Neff, and some of the show’s attendees helping clean up after Jozi’s performance. Perhaps it the size and intimacy of the space at Panoply Performance Laboratory itself that lends itself to this kind of thinking: without a means to keep these things hidden, to keep the performance separate from its surrounding logistics, there is almost a call to contemplate how these unintentional aspects add something to the overall experience of the performance.

“Performance art, video of social action, and live music compose the 31st installment of PERFORMANCY FORUM, a platform for experimental performance practices across disciplines. Each event uses a topic/title as a frame for discussion and analysis of the work. This time, we focus on the intentions of the artist, the intentions of participants, and intentionality as it relates to performance.”

“What is an intention? What does it mean to ‘have’ or ‘not have’ one? How are intentions subverted, misinterpreted, appropriated, and invented? To what extent does an artist get to decide what their work is ‘about’ and/or how it operates for a live audience in a live situation? To what extent are intentions ’embedded in’ or visible in artwork?”