Images are taken from Zak Davis’ exhibition, “Vivo Vitro Silico Sitru,” at American Medium, which is on display until Feb. 12th. Information on the exhibition and gallery can be found here

Rainwet soil beckons a luminous line from the sky. So intense and sudden, and so suddenly evaporated, it leaves a visual echo upon innereyelids; a red vein glimmering in darkness, the first bloodconsecrated separation. It is the crease where flesh first splits with mud; mud still clinging in obstinate streaks, in rolling lines from eyevertices that cleave cheeks, a chiaroscuro of being and oblivion. It is the deep, mudblack furrow from which shivering senses sprout: the body girds itself, retreats into manageable proportion and clenches to shape, moves toward separateness articulated. More than an awakening, it is the first that waking is felt as other than sleep, life other than dream.

Through the dimness of newborn sight we follow this bright diameter–linear division of the round and freeflowing, lightsource driving nothingness into a separate hemisphere, foretaste of future machinery–in exodus out of the dark.This diameter produces a fire that shaves forest, disrobes earth, and bares fields to meekly curl with grain and grass, shy fantasies of past abundance. The same fire by which we are spliced into shadow and light, two bodies defining each other–the one a skyward tangent, the other earthbound and pointing toward Night.

From intestinal oblivion a cloven tongue emerges, presses its shape against the cold pane of Night, and, clicking, licks the air. At once it is the Articulator, the cradle of speech, where dark, guttural noise is assembled into syllabic sense; as well as the Perceiver, the seat of taste, smell, and sight, whose million buds sip the atmosphere, whose belly licks the soily Earth. It is an ovoid rotating on its axis between twin natures, Perception and Articulation, incubating until a thin crack splits its surface. The chaotic mass within the ovoid is blanketed with the outterworldly, shapedefining light that filters through this opening, a luminous line bisecting the circular sky. 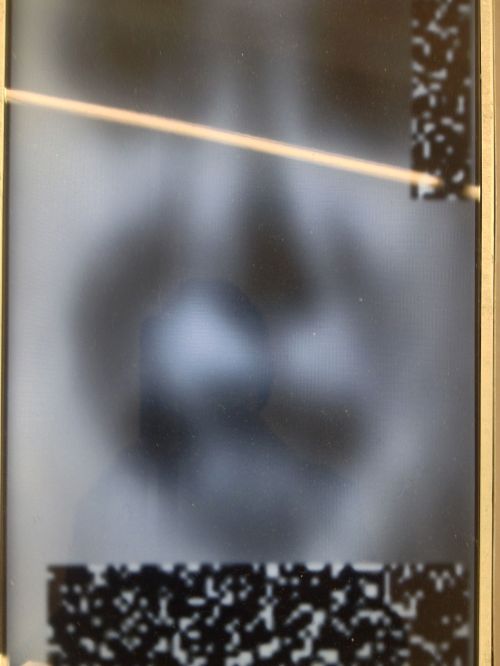